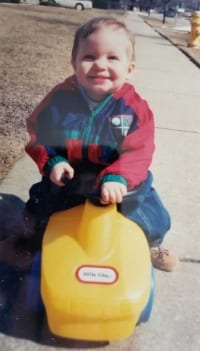 In early January of 1994, we were planning for our first baby and we were so very excited. We had our early prenatal screening tests and the doctors said there was something elevated with the protein tests and suggested an amniocentesis. My husband and I were very young and scared, but we wanted to be prepared so we agreed to the amniocentesis.

Within 2 weeks and nearly 16 weeks pregnant we were told that our baby had a chromosomal disorder called Klinefelter Syndrome 47 XXY. My husband and I were also offered to terminate our pregnancy. I cried and prayed for 24 hours and was completely scared for what this diagnosis meant to me as a 22-year-old mommy and my hubby at 27. Being a very spiritual person we decided that if this baby was in my womb and God allowed him there, God would see this baby and our family through this journey.

We had a very good geneticist who gently guided us through some of the old information regarding Klinefelter syndrome 47 XXY and added her gentle encouragement that every child and birth are different and the information provided is not always what defines each child.

The infant phase was pure joy and during this point in my life, I had just finished college with a degree in Early Childhood Education. I was determined to track Nick’s milestones closely and expose him to the literature and experiences that he needed to succeed. Nicholas was saying words, sitting up, and crawling within a month or two of expected milestones. He loved books and by the age of two was fully reciting his favorite books with me. Nicholas loved playing learning games on the computer like Pajama Sam and Freddie Fish and singing songs, he was a pure delight. 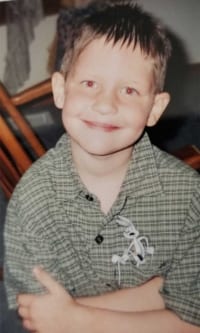 Around age 3 when Nicholas’s brother was born, we began to have some acting out behavior, potty training struggles, and opposition. We saw this more like a sibling adjustment period than anything else. Speech for Nicholas was not an issue and he was talking on typically timeline for growth. For practice I began telling Nicholas at age 3, God made him special and that he had Klinefelter Syndrome 47 XXY. We continued to explain more about his condition as time went on and he could understand. We never wanted him to hear about his condition for the first time when he was older as this may have led to more of a shock and confusion, especially with us knowing at birth.

I have learned over the years that if you have a family predisposition for anxiety, depression, OCD, or ADHD, our Klinefelter Syndrome 47 XXY boys can struggle the same as any 46 karyotypes genetic person and possibly more. I know as his Mom that I had attention deficit and learning challenges and his Dad had OCD. Nicholas has had episodes of OCD as a child, demonstrated by his dislike of tags, tight socks, tight-fitting pants, and would have emotional fits over these things. Because I was a young mom and stubborn, in hindsight I wish I had just avoided the battles by making necessary adjustments but we thought the exposure would make him more tolerant.

Nicholas went to preschool and was a kind boy who loved school and had no delay concerns other than potty training regression. We used behavior charts, rewards, and consequential logic to get us through that phase which ended around age 5. I have met many children in my 30 years of working with children that have these same issues that have no diagnosis.

During the elementary years, we told a teacher Nicholas’s Klinefelter Syndrome 47 XXY diagnosis only if and when concerns came up because we wanted him to have the same mainstream experience as any other child. Nicholas had some reading comprehension issues and asked many questions to be sure he understood instructions properly. As parents, we were not understanding of Individualized Education Plans (IEP’s) or the benefits. Because delays through the early years were not always apparent until there is teacher feedback or standardized testing, we didn’t always recognize he was struggling. Elementary teachers worked with Nick and we would see progress, but difficulty continued with multi-step instruction and reading. Nicholas struggled a bit with homework and had some teary nights, but we would not allow him to give up, we always felt that perseverance would pay benefits, which it did. We put him on a time-release medication for focus at age 10 and Prozac for depression and OCD at age 11 which seemed to help, eventually stopping them at age 16. Nicholas tried team sports like soccer, baseball, and basketball, but he didn’t seem to like or do well in team sports. Eventually, he found gymnastics and individualized activities like frisbee or hiking. He also went on to join the Diving team in high school. 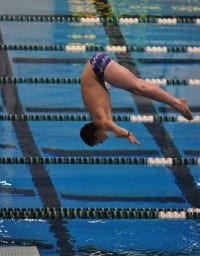 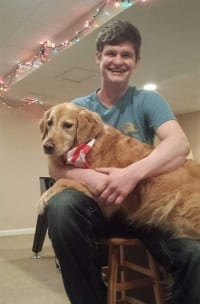 Team sports required quick processing skills for proper plays and getting to the right place at the right time. Nicholas had anxiety about getting hit by balls or getting yelled at by teammates for not making the right play.

Middle school is when IEP’s became important as did one resource class for Nick. We experienced teachers not willing to listen to his needs and they quickly marked 0 points on a paper after he worked 3 hours on it because he left his name off. I went into “Mama Bear Mode” and I quickly emailed the teacher and explained to her that Nick works tremendously hard to get his homework done and she responded that she cannot give special attention to one kid. I quickly called a conference with his counselor and brought in his Klinefelter Syndrome 47 XXY diagnosis and got him the help he needed through an IEP and the era of additional resources began. Otherwise Health Impaired (OHI) was the diagnosis that got him his advocate plan, although Klinefelter Syndrome 47 XXY diagnosis may be more applicable for other children. Now he was receiving extra time on tests, additional time with the teacher, and one resource room to help with homework which alleviated stress for him at school and home. At this time in Nick’s life, we felt the label of OHI was far more beneficial than being labeled by teachers as lazy or irresponsible.

Middle school was the season of the bullies. Nicholas came home complaining that kids that would hold his locker shut or write mean things on the blackboard or just slap him in the hallway. He solved many of his bully issues by asking me if I would drive him to the kid’s homes and park a couple of houses down. Nicholas would ask for the kid and say you can either stop bullying me at school or I will just speak with your parents.

Nicks’s standardized tests were average scores, and his homework was always A’s and B’s. Nick realized that taking detailed notes helped him pass tests, although the amount of writing could become exhausting. 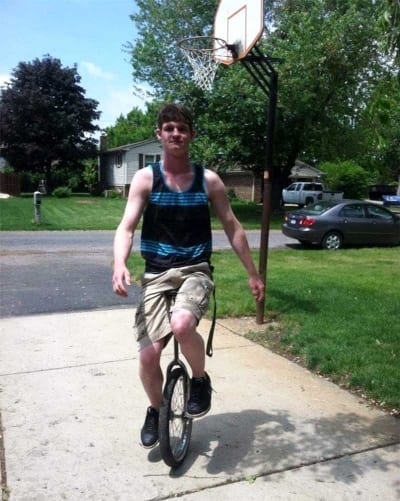 Nick began testosterone around age 14 and used a gel with good results for Klinefelter Syndrome 47 XXY. Nick went through puberty with no real growth concerns, although he fatigues easily. We continue to re-evaluate how the gel is working and have recently questioned whether the shots may help with his fatigue. We discussed sperm preservation and collection between the age of 15 and 16 and Nick was not maturely ready or able to participate and I was not comfortable pushing him. As Nicholas has gotten older it has become less of a concern for that he father his child. Don’t get me wrong it would be wonderful, but there are so many more options if parenting becomes important in his life. The fact that Nick could not have children has been a 25-year journey of acceptance and we are both in a very good place.

Nicholas stayed steady with A’s and B’s throughout high school and with average scores on standardized testing. Nicholas did not love school because he had to work so hard to get passing grades and ultimately graduated with a 3.6 from high school. Nick was on the diving team throughout high school. He had thoughts of quitting a few times out of fear from smacking the water or hitting the diving board he went on to become a state competitor as one of the top divers in Michigan his 11th and 12th-grade year, along with making team captain. 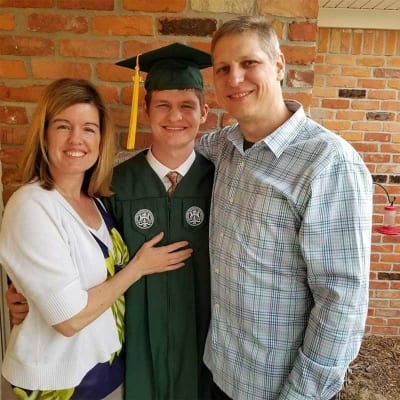 We always encouraged college and Nick went to Eastern Michigan University for 5 years and graduated Magna Cum Laude (3.8 GPA), with a bachelor’s in Marketing. During college, he was able to continue asking teachers for clarifications and get extra time on testing by advocating for his Klinefelter Syndrome 47 XXY through the available resources on campus. Now two years post-college he has had a few corporate internships, but no real promise of a long term position in his field of study, marketing. Although school provided extra help and advocacy and we are finding very quickly that the world does not offer the same grace or understanding for an adult that needs extra time to process information. As a result, we encouraged Nick to take a well paying unionized warehouse job with good benefits. He has felt somewhat betrayed with the realization that college does not promise a perfect career and I felt guilty for a time that we may have misinformed him about potential outcomes. Overall though we continue to realize that life brings unknown opportunities and no one can diminish or take away his degree or potential.

In Nick’s free time he hangs out with his girlfriend and has a great peer group with the young adult church friends he has gathered over the past few years.

Nick loves camping, hammocking, hiking, exploring treasures, and cleaning up the local lakes and rivers. Nicholas enjoys snagging a little attention on his unicycle and sometimes while juggling. I think one of his best friends is our sweet dog, Molly.

Our son has gotten frustrated over the limitations Klinefelter Syndrome 47 XXY has caused in his processing and comprehension, however, he has also shown acceptance and a fighting spirit to get past the limitations and live by the motto to,” find the good”. Life goes on and God has always been good. We grow strong with our challenges and learn many new things. The challenges he is facing in life are not always different than others even without a Klinefelter Syndrome 47 XXY diagnosis. Nick as well as our other two boys are our greatest accomplishments, challenges, and success story’s and it continues to be written with God as our guide. 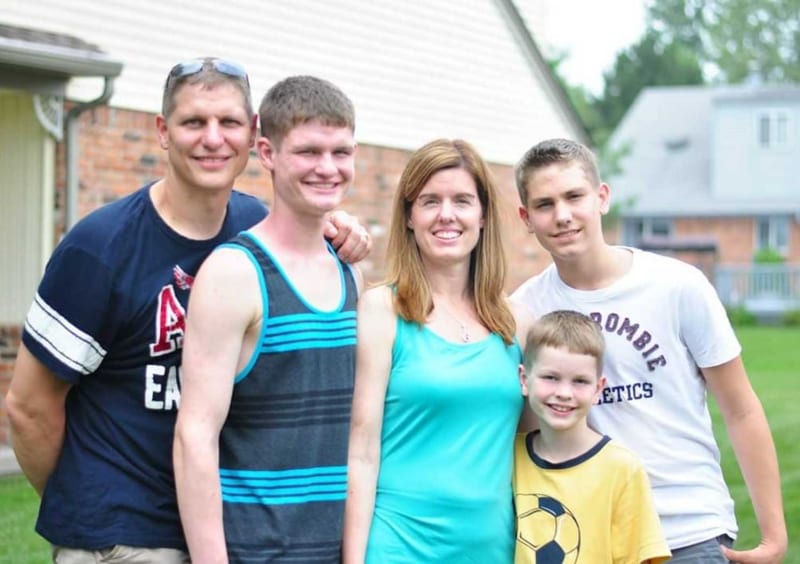