Fears Are Changing Into a Community of Hope

The negatives, stereotypes, limitations, fears and the stigma.

Raising a child is a steep learning curve & does not come with a handy instruction manual. Neither does raising a child with a genetic condition like Klinefelter Syndrome. When we first learned about our son’s diagnosis, we did what most concerned parents do: scour the internet for answers. Like most, our gut reaction was that of discouragement based on Google’s definition & description of what Klinefelter syndrome/47 XXY looks like.

Most parents have high hopes for their kids and want them to be happy, healthy, and successful. The comparison game comes into play and we often compare our kids to the “typical” population. Unfortunately, society often dictates what “success” looks like, what “normal” looks like, and how our boys “should” learn, talk, behave, etc. Up until recently, individuals living with XXY have been defined by the misinformation on the internet, often clouding the many amazing & wonderful ways that make them uniquely them. We are working to change this.

As a parent new to this journey, I’ve often found myself isolated, struggling to relate to other parents of little ones who make up the “typical” population. The Living With XXY community has been a tremendous gift to my husband & I as we’ve been able to relate to other moms & dads who “get it” and we can finally say “oh, you too?” It has been a privilege to meet families from around the world who are walking this same journey, being both parents & advocates at the same time. Fighting for our kids and raising them up to define themselves, free from the stigma that has unfairly placed a box of limitations around them. Every diagnosis story seems to begin with the limitations, the inabilities, the weaknesses, and the cannots.

It wasn’t until recently, that I was able to fully accept Jack as Jack. My inability to handle the uncertainty of how/where he will fall on the spectrum drove me to a place of trying to control things that are quite frankly, out of my control. I let the fear of the internet’s definition of XXY take over as I was on a mission to prevent instead of just letting go and letting Jack be who he was created to be I allowed the incoming questions from outsiders to stand in the way of becoming fully accepting of my son. Freeing myself from society’s definition of XXY has allowed me to truly learn who my son is & who he is becoming. Jack continues to shatter the stigma every single day, just like so many incredible individuals in this community. 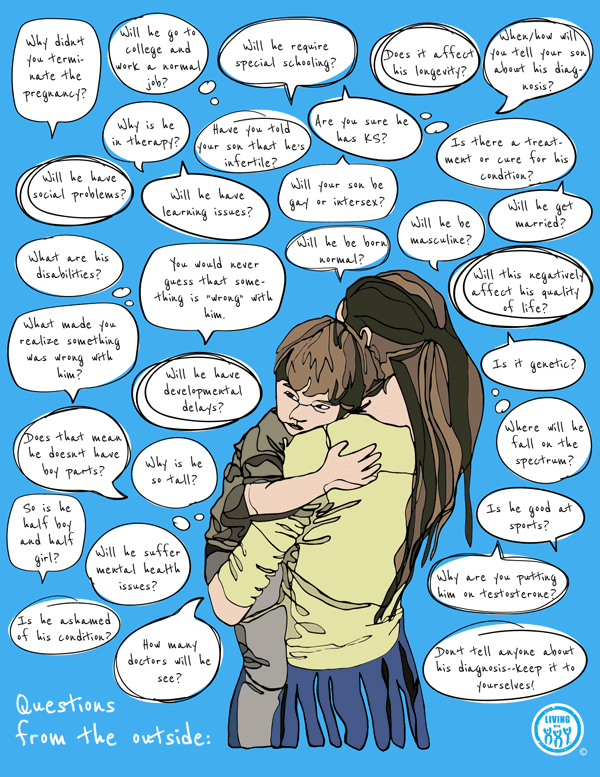 The caring, comforting, kind, visual, empathetic and self giving.

Imagine a world where the internet, society, research, schools, and families viewed Klinefelter Syndrome from this lens. We asked the community to describe themselves or their son, and these were the most common words & phrases collected. Our mission at Living With XXY is to show the world that our guys are so much more than JUST the negatives, the stereotypes, the limitations, and the stigma. Each and every individual is unique in their own way and is equally deserving of love, acceptance, success, and support. As a community, we are changing the face of Klinefelter Syndrome as we work together to build each individual up to reach AND exceed their full potential.

Living With XXY has heard the voices of our community & is working diligently to flip the script and allow your collective stories to change the face of Klinefelter syndrome. A big thanks to all who participated in sharing and for the exceptionally talented Emily Blackmore for bringing our voices to life through this art. Thank you again to all who shared these positives. 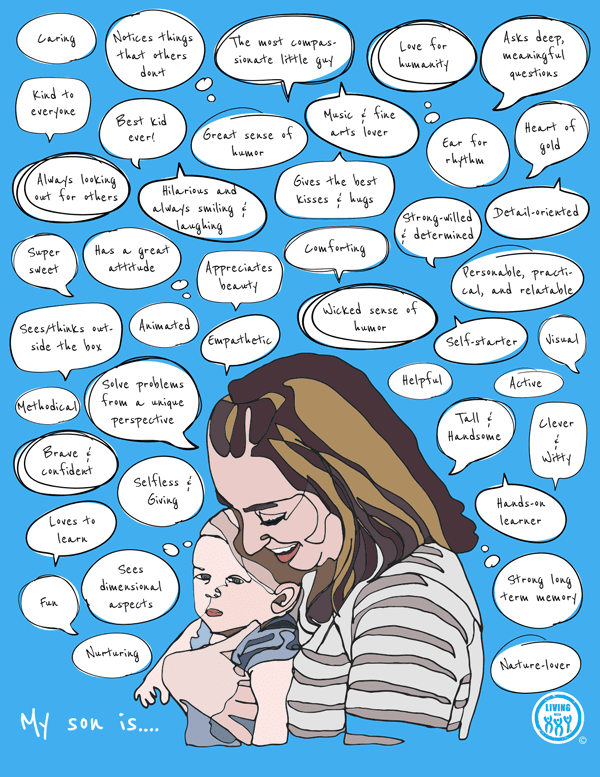