The Voice Of Dylan Mathis

Dylan Mathis is a 25-year-old man living with Klinefelter Syndrome (47, XXY). Dylan resides in West Dundee, IL, where he lives with his fiance, Robin. Dylan is employed full time in the residential service tech for Xfinity. 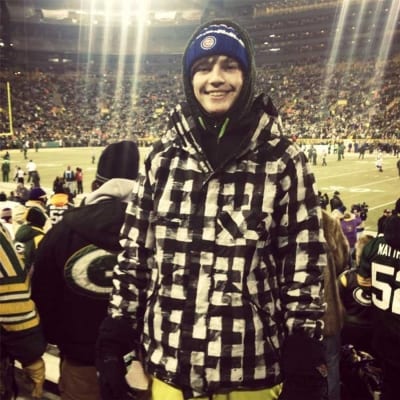 Born in Highland Park, Illinois, Dylan was the oldest of two boys, and is two years older than his younger brother Jake. Dylan was born prematurely, and weighed just a little over 5 pounds at birth. Growing up, Dylan was lanky, whereas his brother Jake had a stockier build. Both boys were competitive, and into sports. Dylan was diagnosed with ADHD, as well as several learning disabilities. His speech development was also delayed. In school, Dylan was slow in reading. Dylan was very visual as a child and would frequently line up his toy cars by color or make patterns with his Legos.

In middle school, Dylan began wrestling. Even though he had a slight build, it was easier to blend in during those years. He hesitated to try out for the wrestling team in high school, but with the encouragement of his father and coach, he did. Having dealt with anxiety and depression growing up, Dylan credited wrestling with helping lift his mood. He said being able to “put it on the mat” helped him through high school, and to figure out who he is now.

Even though he continued to be tall and lanky, Dylan found his place on the wrestling team. Wrestling required planning and forethought, forcing him to put aside his anxiety. Even though he was self-conscious about his slender frame, it gave him an edge over his opponents. Since wrestling relies heavily on psychologically overcoming one’s opponent, Dylan’s appearance hid his skills from other competitors. 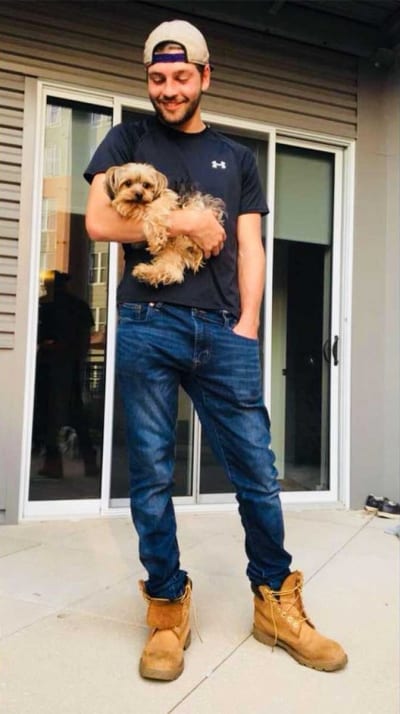 In high school, Dylan described himself as a “quiet athlete,” and put most of his focus into wrestling. While he didn’t enjoy reading or math, he liked science andhistory. He was granted extended time to complete tests, which allowed him to have more academic success. Art was his favorite subject, as Dylan had always been creative. Competition occasionally sparked between the brothers, when Dylan would earn Cs, and his brother would bring homes As. However, when he earned a B, Dylan was satisfied with that.

In high school, Dylan had a small group of close-knit friends. He learned to “laugh things off,” and focused on being the best he could be. Dylan dated, and with his mom’s encouragement went to other social events, like dances and prom. When he wasn’t at school or wrestling, Dylan worked alongside his family at their soccer store. Working with the public helped Dylan overcome his severe social anxiety, as he was frequently forced out of his comfort zone through interactions with customers.

After experiencing a late onset of puberty, Dylan was diagnosed with Klinefelter Syndrome (KS) when he was 13 or 14 years old. Even though he’d always felt “something was a little off,” Dylan recalled he still felt somewhat scared at hearing the words “Klinefelter Syndrome”. He found himself “wondering why he was chosen.” He noticed a difference in his body, as opposed to other men’s, saying he could “…see the difference in body mass, building muscle, Klinefelter Syndrome makes it hard to look as masculine as possible”. Dylan had very little body fat in high school, which didn’t catch up until college. Even now, he can get away with eating a little more than other people. 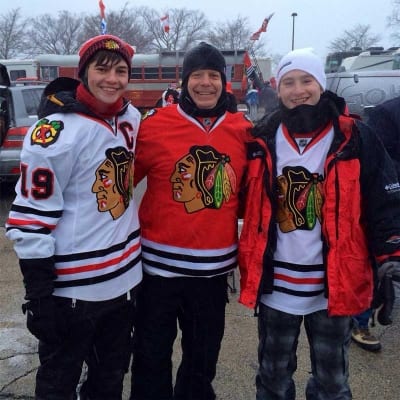 During this process, Dylan’s parents were with him every step of the way. They got him an appointment with every specialist he needed. He described his mom as his “number one supporter,” and said his dad is his “number one fan.” His parents brought him to see Dr. Aaron Benjamin, who was the top endocrine specialist in their area. Dr. Benjamin is a specialist in Klinefelter Syndrome, and Dylan has been a patient of his since the diagnosis. Dylan said it’s “nice having a doctor who understands KS.” While Dylan is Dr. Benjamin’s youngest patient, Dylan feels “it’s good to see that there are positives to look forward to in life, no need to doubt yourself because of differences or complications that KS makes”.

After receiving the diagnosis, Dylan started on testosterone replacement therapy right away through injections, and saw immediate results. He saw his pediatrician for injections, which were done in the hip. He made the switch to an underarm patch, but had an allergic reaction. He also tried topic treatments, but struggled to maintain the correct dosage, causing his testosterone levels to fluctuate. He continued going to the pediatrician’s for injections until his senior year of high school, when he learned to do the shots himself in preparation for college. As he began adjusting to using testosterone, his parents could tell when he was due for a shot due to mood fluctuations. 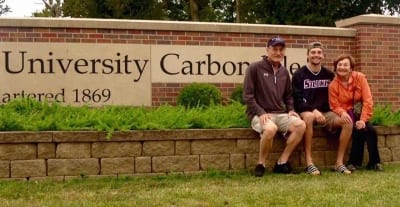 When it came time for college, Dylan wanted to go far from home but still wanted the benefit of in-state tuition. He selected  Southern Illinois at Carbondale (SIC), which was six hours from Chicago. He selected SIC because it was a smaller institution, but not too small, and the campus was surrounded by nature. Dylan enjoyed riding his longboard and cruising around the scenic campus. He entered the Achieve Program, which granted him extended time for tests and assistance. He originally started in the graphic design program, but realized he wanted something more hands-on and switched to screen printing. For a minor, he selected environmental studies to complement his love for the outdoors. He joined a fraternity his first year, where he made a lot of friends, many of whom he stays in contact with today. He also took American Sign Language, which allowed him to use his hands. He loved it and caught on quickly, finding it easier than learning another oral language. 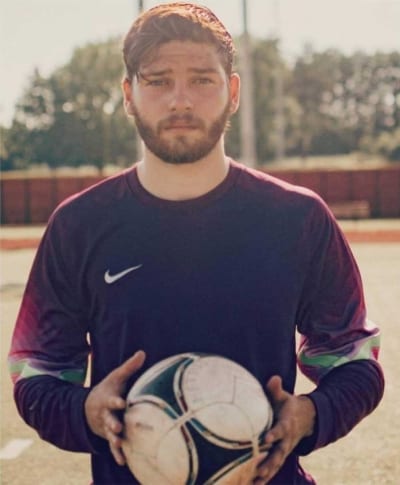 Dylan wasn’t out about his diagnosis in college, but he didn’t keep it a secret, either. He brought his roommates into the fold, letting them know why he was doing injections. Eventually, Robin took over and began doing the shots for him, even before they were officially dating. Even though he didn’t tell her about his diagnosis, Robin knew he was taking testosterone, and figured it out on her own. Eventually, Dylan shared the diagnosis officially, as they both want to have children. His endocrinologist put him in touch with a fertility specialist in Chicago to discuss their options.

While Dylan wasn’t worried about telling Robin about infertility, he was worried about the information she might find on the internet, as the studies areoutdated, and he “felt like the complete opposite of what was represented.” He was concerned that when he told people about his diagnosis, they would associate him with the negatives about 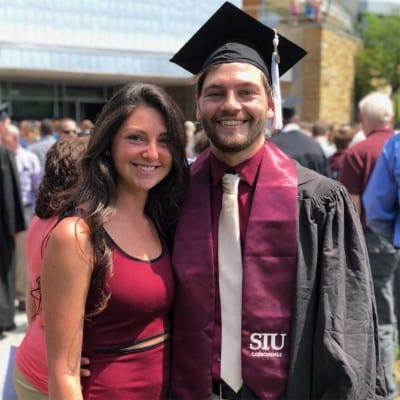 As an adult, Dylan’s fiance Robin continues to administer the shots for him, which allows him to relax and not hesitate before the injections. He finds if he hesitates, he’s prone to getting charlie horses, or muscle cramps. He currently has the injections in his thigh, and does one every other week, alternating legs. 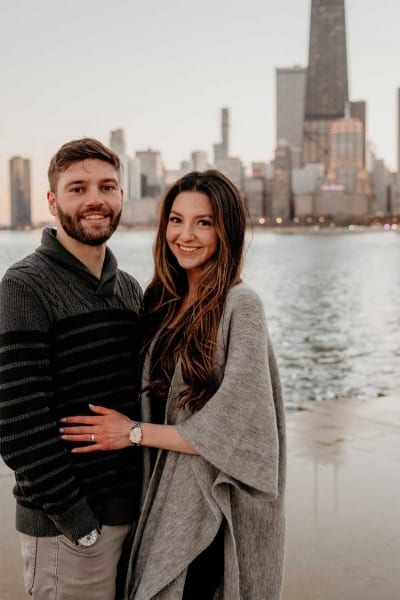 After earning his Bachelor of Arts degree, Dylan moved back home and worked part-time at his parents’ store and Miller Coors as a guest relations server. He now works full-time as a home service tech for Xfinity.

Dylan is engaged to Robin, whom he met at SIC, and started dating senior year. Robin works as a nurse, and they recently moved into an apartment together. After getting engaged in November 2020, the two hope to get married on November 7th, 2021. Robin has always been supportive of Dylan and his diagnosis. She jumped in with both feet, and did her own research to better understand Klinefelter Syndrome. 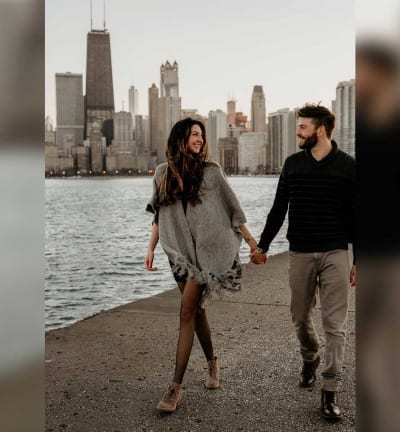 When Dylan first found out about his diagnosis, he never imagined sharing his own story with the Klinefelter Syndrome community. He encourages others who are diagnosed with KS to focus on accepting who they are, saying,  “You’ll be ok and life goes on, you’ll make the best out of certain situations and you’ll cross difficult paths no matter who you are but it’s about accepting the challenges you may face more than others and its doable. You’ll be ok. Live your life to the fullest.” He went on to add that self-acceptance is key, because “everyone has something…There are invisible illnesses everywhere, and you can’t see them on people but they are there. Knowing that everyone is dealing with something is the most important thing.”