I’ve hesitated to share our 48 XXXY NIPT publicly for the past year because I didn’t want our son to be looked at or treated differently, & I wanted him to be the one to decide if & when to share it. But I am reminded that our entire existence is for us to serve God & that His will is more important than our desires. I don’t believe everything happens for a reason. However, I know that God uses everything for good. And I feel that we are in this position to educate & bring hope to others because information on it is so limited, & I was so needlessly worried initially because the only information available sounded terrible.

When I was pregnant with Wyatt, I opted to do NIPT (Non-Invasive Prenatal Testing). Primarily because I wanted to know the gender early with no accurate indications. Alec & I were only 27, so the likelihood of a genetic disorder was unlikely. The results came back as abnormal. We understood there was a 36% chance he would have an extra X chromosome called Klinefelter’s.

Alec & I knew we would keep our son regardless of genetics, & as I researched it more from people who have it, I learned it wasn’t as “bad” as the internet made it seem. It is a spectrum, & many men don’t even realize they have it until they struggle with fertility & are searching for the cause. We declined further testing until he was born because his risk in utero wasn’t worth it. We knew we would keep our son either way. Additionally, we were told it was only a 36% chance, & I was praying continuously & hopeful that he wouldn’t have it. 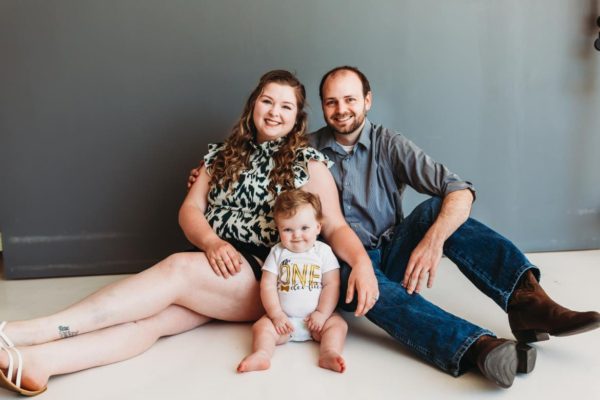 When Wyatt was about two weeks old, the results posted: that he had two extra X chromosomes. We didn’t even know this was possible. This diagnosis is infrequent, about 1:50,000. I didn’t know what this meant, just that it was “more severe” than only learning about 47 XXY. The hospital’s pediatrician that discussed the results with me said he would be developmentally delayed & intellectually deficient, among many other negative expectations.

I cried so much, not because I didn’t love my son or wish he was different. But what parent wants to see their child struggle? He was two weeks old & I was worried sick about his future. I was full of anxiety. I had to do everything possible to make sure he was set up to be as successful as possible in life & was hyper-alert, looking for potential “signs” of his diagnosis. And I was so mad at God for letting this diagnosis exist at all, & even more for allowing my son, & us, to have to deal with it.

But here we are, a year later. Our son is just like any other 12-month-old, physically, developmentally, & intellectually. We wouldn’t know anything was “different” if we didn’t do the NIPT. You may be thinking, “it’s only the first year,” but many significant milestones happen that first year, & he has hit every single one on time.

I share this because it has been scary, ultimately being repeatedly told it’s a “wait & see” journey. I’m generally anxious, so not knowing what the future holds & not having any firm answers is frustrating. I regret how much I let the worry consume my thoughts & happiness this past year, mainly in the beginning.

I’m not here to discuss political views but to educate. The abortion rates for Klinefelter’s are very high, so I can only imagine it’s even higher for 48, XXXY. The internet makes it sound like such an awful diagnosis with little hope of a “normal” life. I know things can change in the future. There’s no guarantee he’ll always be at the same level as a child without a chromosome anomaly. We also know there isn’t a guarantee he won’t be. When I look at my son, I feel so much joy, love, and perfection.

He is sweet, silly, intelligent, mischievous, & the greatest blessing to us. It’s not my place to tell someone they shouldn’t get an abortion. However, please don’t let a diagnosis like this be the reason you do. I never would’ve wished for my son to have this diagnosis because no parent wants their child to have potential challenges, but I am so in love with that precious little boy & I know he is capable of great things.

I pray that this reaches the right person & makes a difference, whether that is a decision to keep their baby if getting diagnosed prenatally or a wave of hope knowing that those negative possibilities are simply that: possibilities, not guarantees.

We are blessed to be connected with other families who share our son’s diagnosis. One, in particular, has a son about five years older & is in regular classes & has an average IQ, etc.; he looks & acts just like any other six-year-old! Only God knows what each of our futures holds. I know Wyatt will move mountains. His diagnosis is a part of him, but it doesn’t define him or what he can accomplish.