The voice of Jason Smith

When Jason was a young teenager, he began noticing his body undergoing unexpected changes. Despite an active lifestyle as a competitive swimmer, he began developing breast tissue. After visiting with a specialist, Jason received a young adult Klinefelter diagnosis. 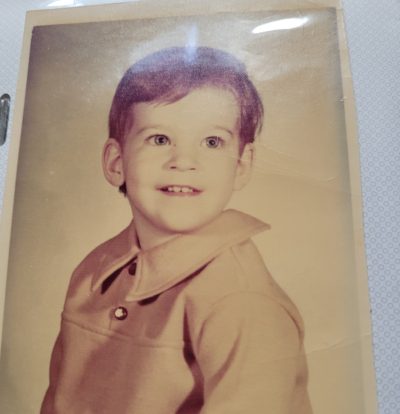 Raised in Scranton, Pennsylvania, Jason grew up in a loving home with an older brother and sister. As a toddler and child, Jason developed the same as his siblings, but by the time school came around, some differences began to show. Jason was timid, and making friends was hard for the first few years.

Noticing something was different about their youngest child, his parents brought him for testing. Jason’s parents discovered he had a learning disability. His parents were ready to support him with whatever he needed to be successful. He had help in school and ended up repeating the fourth grade, which gave him time to mature.

Middle school proved to be a bit more complicated. Jason “fought the system” a lot and spent much of his time in detention. Math was his nemesis, and he struggled 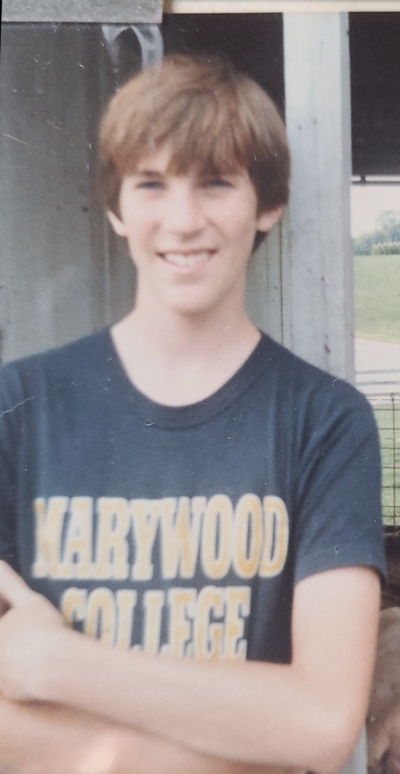 with organization and learning comprehension. Despite these difficulties, he shone when it came to spelling and science. Unfortunately, Jason was bullied a lot during his middle school years for being gay, which put him into a “tailspin” of failing classes and acting out. His parents were baffled by the change until he finally told them more about what he was experiencing.

Sports kept Jason busy from elementary school to high school. He played soccer from second to eighth grade but fell in love with competitive swimming. Swimming provided an avenue to have friends outside of school, as he met kids from all over. In addition, he participated in a sports medicine program in high school, which allowed him to help the school’s sports medicine trainer.

By high school, Jason had developed a close circle of friends, but he still felt self-conscious about his increased breast size. He was around 17 when the problem became more prevalent. Noticing his breast tissue had grown so much that it stuck out on his thin frame, Jason went to his parents and asked for their help taking care of the issue. After the procedure and a three-week recovery, Jason was back in the pool with more confidence, and he felt more comfortable in his skin. 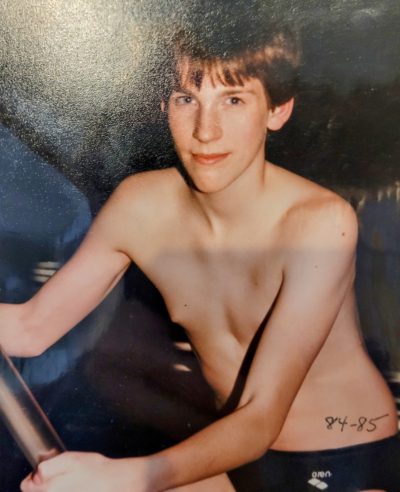 By the time he’d reached high school, Jason had already received his young adult Klinefelter diagnosis when he was 14. While it hadn’t become a significant issue, he showed signs of gynecomastia or increased breast tissue. His parents took him to the pediatrician, who referred him to a specialist at Children’s Hospital Philadelphia. While with the specialist, they took over 20 miles of blood to test. 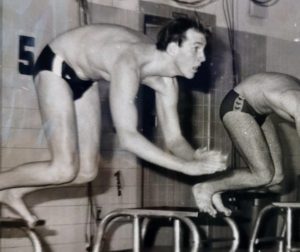 When the results came back, they referred him to a geneticist. Jason tested positive for Klinefelter syndrome, or 47, XXY. He learned he might grow taller than his peers and that it was most likely his body would be pear-shaped, meaning he’d carry extra weight around his hips and stomach. They went on to mention he may not grow facial or body hair and the possibility of having a learning disability. That part made sense to Jason since he’d already been diagnosed with learning disabilities in elementary school.

Jason learned he was most likely sterile, therefore, wouldn’t be able to father children. He recalled this news as being “devastating.” He was still struggling with his sexuality, so in the back of his mind, he felt as though it might not matter if he could have children or not. His parents were shocked by the unexpected young adult Klinefelter diagnosis but continued to support him as the family navigated their way forward. 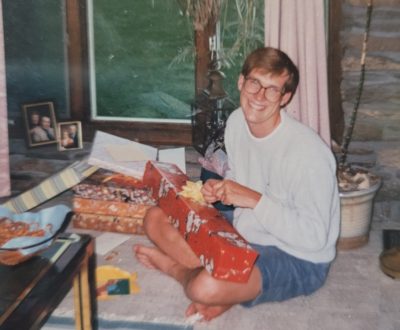 Following his diagnosis, Jason immediately began testosterone replacement therapy. He visited an allergist every other week, where he would receive his injections. As the years went on, Jason tested different types of testosterone, such as patches. He eventually switched back to injections before moving on to a topical gel.

The testosterone therapy kick-started his growth. During senior year, he shot up from 5ft 11″ to 6ft 4″ in height. While figuring out his dosages of testosterone, he experienced bouts of moodiness in high school. When his testosterone dropped, he would feel fatigued, with an energy revitalization when he received his shot. Today, he still notices the ebbs and flows as his testosterone levels rise and fall. 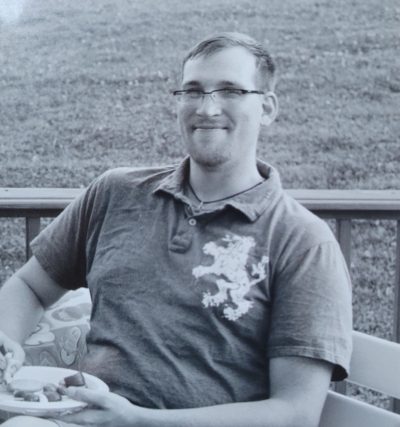 During his senior year of high school, Jason decided to tell his friends and family that he was gay. Jason’s friends immediately accepted this; his parents did the same after some time. He got into a junior college many of his friends also attended and majored in Fine Arts. He graduated in 1991 and got into The Savannah School of Design.

While in Savannah, Jason worked as a tour guide and a restorationist. Far from home allowed Jason the freedom to grow as an individual. He became more outgoing and developed his circle of friends. Being a tour guide helped build his social skills, and he said it was “the greatest experience of his life.”

After graduating with a degree in historic preservation of architecture, Jason moved back home to Pennsylvania to figure out what would come next. He worked retail for a while and then spent the next decade working as a certified nursing assistant. He had no serious relationships but spent time with friends and enjoyed a single life. 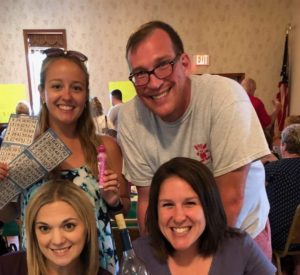 By 2003, Jason was ready for the next steps in his life. He began exploring the possibility of getting a teaching certificate, following in the footsteps of his father and siblings. After graduating in 2006, he worked as a substitute while looking for a more permanent position. 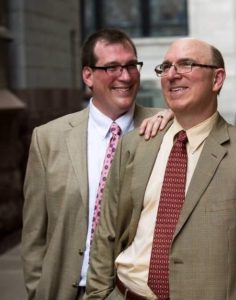 A friend helped him land a position with a technical school, where Jason taught various courses for the next eleven years. When the school went out of business, he began looking for a more permanent position. Eventually, Jason started working at the high school level and is currently teaching kindergarten through eighth grade.

In 2008, Jason met his future husband through an online dating site. They moved in together, and life “changed differently.” They moved into an apartment together and became a blended family as his husband had a son from a previous relationship. 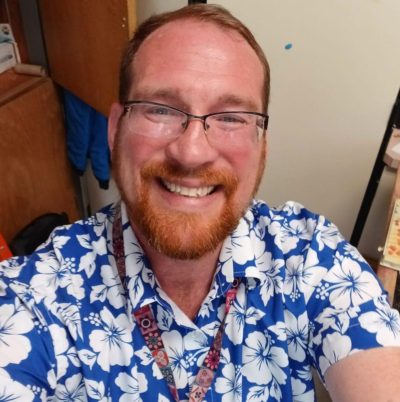 Not understanding very much information about Klinefelter syndrome as a child, Jason is interested in learning more. He said, “I think it’s better to know something you live with every day and not be in the dark about it. Pushing it aside isn’t the wisest thing to do. You should know the newest things about this chromosomal disorder.” 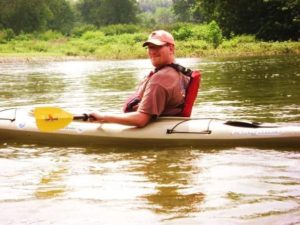 When asked what he’d tell parents of children with Klinefelter syndrome, Jason said, “Take it one step at a time. There are going to be some highs and lows. If that child has learning problems, you must figure out ways of conquering those things. Schools have programs to help kids get through school in the most positive way. You must be supportive throughout the child’s life until adulthood.”

He also encouraged men coming to the diagnosis later in life to spend time researching and figuring out who they are as someone living with Klinefelter syndrome. Jason is proud of who he is and excited to learn more about what it means to live with XXY.