“This is part of who your son is. He is still your son,” – Jacqueline Lightcap’s story.

Living in Topeka, Kansas, Jacqueline Lightcap is the mother of two teenagers. Happily married for 28 years, she and her husband are raising their 14-year-old daughter, and 17-year-old son. However, the family was in for a surprise in 2017, when their son Gabriel was diagnosed with Klinefelter syndrome (KS), or 47, XXY. This is their story about the unexpected diagnosis, what they’ve learned about KS, and how they’re doing today. 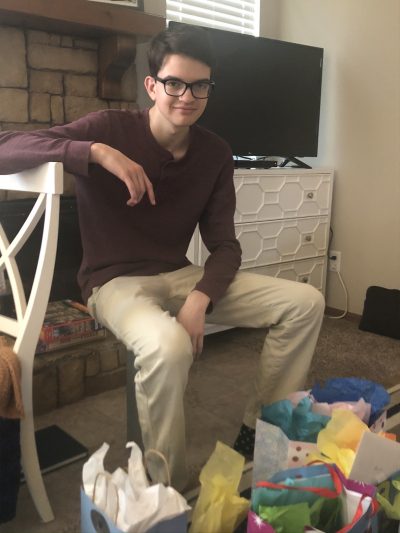 During a visit with Gabriel’s primary care physician, Jacqueline was surprised when the doctor asked Gabriel to leave, but requested she stay. She recalled wondering, “Hmm, what’s going on here?” as they weren’t expecting anything unusual to arise from a routine physical. While the doctor acknowledged the family hadn’t come in with any problems, and didn’t anticipate finding anything during the exam, he had some concerns.

While Gabriel was overall healthy, the doctor noted he wasn’t developing at the same rate as his peers in some areas. The doctor told Jacqueline that Gabriel was “really tall, but some of his other pubertal markers are not tracking”. While the doctor said it could be normal, he noted there were other indicators that Gabriel should be further along in his development. He advised they take a watch and see approach, with a return visit scheduled for three months out.

After three months, Jacqueline and Gabriel returned for the follow-up visit. The doctor suggested he thought Gabriel might have Klinefelter syndrome, and was “great” while explaining the possible diagnosis. He did not make Jacqueline feel scared, or like it would be the end of the world for Gabriel. To confirm his suspicions, the doctor referred them to a pediatric endocrinologist for bloodwork. He shared their options, and the process of receiving a formal diagnosis.

To avoid stress, the family opted to see a pediatric endocrinologist close to their home. The endocrinologist was “amazing,” and talked the family through the entire process. Following bloodwork, and then a karyotype test, the family received the diagnosis at the end of 2017. Gabriel had Klinefelter syndrome.

Jacqueline was at a cello lesson with Gabriel when she got the call confirming his diagnosis. Even though they knew it was a strong possibility, she still held out hope he wouldn’t have Klinefelter syndrome. The doctor confirmed the diagnosis, but stressed to Jacqueline that “Gabriel was still Gabriel.” The doctor said the diagnosis might explain some things about who Gabriel is. In hindsight, Jacqueline can see he had some issues with social anxiety, although he’d met all his milestones on time. His testosterone levels weren’t worryingly low, so the doctor told them not to stress, and to focus on enjoying the holidays.

Jacqueline began exploring what information she could find about her son’s diagnosis. What she found on Google scared her. While she read stories of those diagnosed, she didn’t see the same traits in Gabriel. For her family, Jacqueline has opted for a more holistic approach, including being mindful of what they eat, and a slowed approach to vaccinations when they were younger. She wanted to find a thoughtful way to help Gabriel that felt right for him and their family.

She was able to connect with another mother, Julie Urban, who lived near Kansas City. Julie’s son also has 47, XXY, and the women were able to exchange information via email. During her research, Jacqueline found Ryan and Living With XXY. She described him as “a bright shining light” in the middle of darkness and thanked him for what he provides for the community. While talking about the lack of positive information out there about Klinefelter syndrome, Jacqueline unexpectedly found herself becoming emotional. The negatives surrounding the diagnosis can be overwhelming to families, and those newly diagnosed.

Jacqueline researched the best way to break the news to Gabriel about his diagnosis, and said it took some time to tell him. They opted to wait until his sister was out of the house to give him 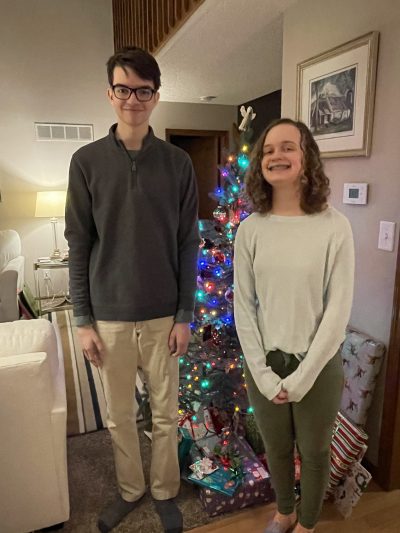 privacy while they talked about the diagnosis. Due to the frequent tests and doctor’s visits, Gabriel had some idea that something was going on. They explained he had an extra X chromosome, and he understood this based on what he was learning in school about genetics.

To explain, Jacqueline told her son everyone carries books in a backpack, and he happened to have an extra book. She told him KS is a spectrum disorder, and she felt he was on the low end of how it affected him. Gabriel took the news well. He remarked he’d “always felt different” and this “may explain that.”

In retrospect, Jacqueline realized some of the signs were there while Gabriel was growing up. They just didn’t know the things about him that were perhaps a bit quirky could be attributed to having an extra X chromosome. For example, Gabriel was shy and would not talk to his kindergarten teacher for the first month of school. Despite his shyness, he did well academically, so they chalked it up to normal kid behavior. Gabriel is very quiet and introverted. While he has a group of friends he is “a total teenage boy with,” he’s not one to go outside of his comfort zone. Things such as ordering from a menu in a restaurant have been sources of anxiety for him.

However, some of the pieces started coming together for them. When Gabriel was a child, someone asked Jacqueline if he was perhaps autistic. She was offended, retorting that “he’s just a quiet kid.” After the diagnosis, Jacqueline felt it important not to label him. She said “He’s still Gabriel, even though there are medical issues he will now have to deal with his whole life.” Gabriel didn’t really want to discuss the diagnosis and approached it with its “not a big deal” attitude.

After telling Gabriel about his diagnosis, they shared with family. They were glad to find their family was supportive, and accepting. They told Gabriel’s sister right away, who was 10 at the time, and didn’t fully understand. As she’s grown, she’s beginning to understand more about the diagnosis. As his polar opposite, she’s energetic and organized, which can at times create a bit of friction between the siblings.

While they have talked about the fertility issues that come with a diagnosis, it’s not something they are focused on at this time. Gabriel started testosterone replacement therapy in 2018. After experiencing low energy, he started with injections. The injections caused some emotional outbursts while they learned how to regulate the amount he needed. Now, they’ve found a dosage that works for him.

After growing four inches in one year, Gabriel was diagnosed with Osgood-schlatter syndrome. Individuals with this diagnosis can have pain and swelling above their knee joint.

While Jacqueline described herself as the researcher of the family, her husband had a more “laid back” approach to the diagnosis. She struggled with accepting it for a bit, especially when she realized it was something he would have to deal with for the rest of his life. She felt a little sad over the possibility of him not having children, but has accepted it now.

When asked about Gabriel, Jacqueline described him as a “good kid.” She said he’s kind, honest, smart, empathetic, and very observant. From a young age, he always observed everything around him. He’s a good judge of character, and very analytical. Jacqueline noted while there are times he might lack confidence in certain areas, he’s also very focused when he puts his mind to something. He’s close with his friends, and family.

Gabriel is someone who is a hands-on learner. He’s a good writer with terrible handwriting, and “hears words and sees colors.” To him, some colors are more vivid than others. While it may take him longer to accomplish some tasks, he always perseveres to complete them.

Gabriel is an avid gamer, and enjoys playing both Xbox and Switch with his crew. They talk on the phone, through Zoom, and over their headsets to stay in contact while gaming. Gabriel has a great sense of humor and dry wit and enjoys shows like The Office and Community. He plays piano and cello, as well as composes music. He also has earned his second-degree black belt in taekwondo, which helped boost his confidence.

Looking ahead to college: 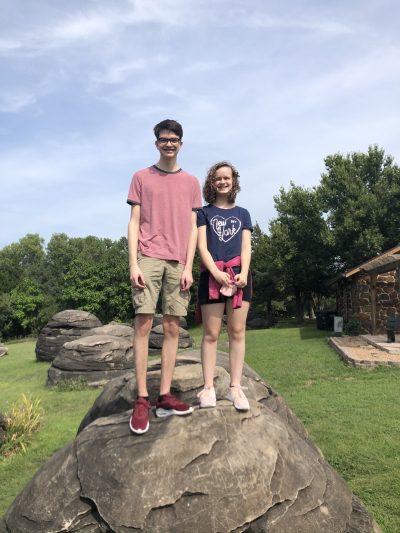 Now, they are starting to look forward to the future, and thinking about college. Gabriel will have to continue his testosterone shots every three weeks, which is something to take into consideration. Although Jacqueline felt there are areas where Gabriel is behind, she also realized she has to push him a bit more. She highlighted Ryan as a good example for Gabriel of what can be accomplished, and is motivated to help Gabriel achieve his goals. Prior to the COVID-19 shutdowns, Gabriel was doing an advanced placement program through his school. He currently earns As and Bs. As a member of the school board, Jacqueline disclosed the diagnosis to the school nurse, and head of special education. She wants him to be ready to take on college.

While close friends know about Gabriel’s diagnosis, this is the first time Jacqueline has shared their story beyond their close circle. Gabriel gave his permission for her to share about his diagnosis, and is ok with her talking with Ryan about their experiences.

As a mother, Jacqueline wants those who are receiving a prenatal diagnosis to know that Klinefelter syndrome is not a death sentence. In fact, it’s far from it. Jacqueline wanted to share their story so people can see “This is Gabriel…what is the extra X”. She reminded parents not to “chalk everything up to this. This is part of who your son is. He is still your son.”