Dan and Lacy are parents to a baby boy with Klinefelter syndrome. The couple agreed to noninvasive prenatal testing (NIPT) to learn the sex of their baby. They were excited to find out they were having a boy, but surprised to learn their son would most likely have an extra X chromosome.

Dan and Lacy (names have been changed to protect the family’s privacy) live with their two children in the southern part of the United States. When Lacy was about six weeks pregnant with her second child, the country entered lockdown in the wake of the COVID-19 pandemic. Wanting to know the sex of the baby so they could pick names and start planning a nursery, she agreed to NIPT. A week after the testing, Lacy’s phone rang.

On the other end of the line was her obstetrician. She began by explaining that the baby was perfectly healthy, and while he didn’t have something like Down Syndrome, the test had indicated “an abnormality regarding gender.” The doctor told Lacy while they were expecting a baby boy, he was showing signs of Klinefelter Syndrome (KS). The doctor explained the positive predictive value of the test, telling Lacy it was 89% likely their baby would be born with 47, XXY. 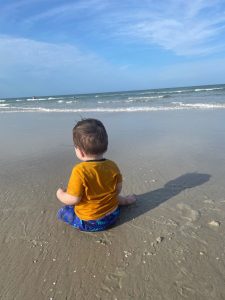 Taylor enjoying the beach near his family’s home

For both Lacy and Dan, the call was shocking in more ways than one. They’d agreed to the NIPT only to identify the baby’s sex. Both parents explicitly stated they didn’t want to know if there were any syndromes or conditions. Dan felt very taken aback by the delivery of the news he’d expressly said he didn’t want to receive. He felt angry, and experienced feelings of denial. As they already had a perfectly healthy child, it seemed unreal there could be something wrong with their unborn son.

Neither had heard of Klinefelter Syndrome before the phone call. They weren’t aware it was something their son was at risk for. Their doctor referred them to a genetics counselor for further guidance. Lacy recalled upon hearing the news that her heart sank. She immediately began worrying about her son’s future quality of life. They started Googling, which was “a disaster.”

Learning more about the diagnosis:

Dan continued to navigate his own feelings about receiving the news, and felt as though the pregnancy had been “ruined,” as they hadn’t wanted to spend the time waiting for their son to be born worrying about his health. The unexpected diagnosis lingered in the back of his mind, and both parents felt scared. They feared he wouldn’t be happy, successful, get married, or enjoy his life.

Feeling as though the initial joy they felt at learning they were expecting a son had been stolen by the diagnosis, the couple spent more time further researching the syndrome. After encountering some less than ideal information online, they stumbled upon Ryan Bregante’s YouTube videos. They were encouraged to see Ryan was healthy, happy, and thriving, which was exactly what they hoped for their unborn son’s future. Lacy recalled thinking, “Ok, he’s going to be okay. He can have a happy life.”

Their meeting with the genetics counselor two weeks later helped unravel their feelings of fear and apprehension about the diagnosis. The counselor shared what she knew about sex chromosome variances, and connected them with the eXtraordinarY Babies study at Colorado Children’s Hospital Colorado. The diagnosis began to feel less mysterious. After chatting with the counselor, Lacy felt comfortable allowing the diagnosis to slip to the back of her mind so she could focus on enjoying her pregnancy.

While something that lingered, it wasn’t something that weighed upon her daily. They declined an amniocentesis, and decided to wait until birth to confirm the diagnosis. In the meantime, they found joy in the pregnancy again. They picked out their son’s name, had a wonderful baby shower, and decorated his nursery. Lacy connected with Living With XXY’s board member Marci Tatham, which helped alleviate some of her lingering worries. 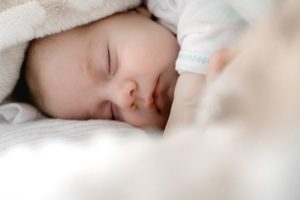 Taylor was born in November of 2020. The parents described the birth of both their children as “a top life moment.” They were excited to welcome their baby boy into their family. As they got to know their new son, Dan remained hypervigilant. He monitored Taylor for symptoms, wondering what was or wasn’t related to Klinefelter syndrome.

Fortunately, they were able to enroll Taylor in the eXtraordinarY Babies study when he was two weeks old following the connection made during the pregnancy. Their interactions with the providers in the study and at the clinic helped alleviate their concerns, and they were able to participate in virtual appointments.

Today, Taylor is a healthy, happy, and thriving nine-month-old. Lacy described his life as “awesome,” and said he’s calm, funny, and sleeps well. He has an “amazing head of hair” they enjoy styling. While she understands Klinefelter syndrome is a spectrum disorder, meaning every individual is impacted differently by the symptoms, Lacy wished she could go back nine or ten months and tell herself the diagnosis wasn’t going to dominate their everyday life.

As parents, both Dan and Lacy have come a long way from their initial feelings of fear and worry about Taylor’s diagnosis. As time has gone on, they’ve moved past the shock and disbelief that came with the initial diagnosis, and the worries their son wouldn’t live a normal life. Dan in particular experienced a shift when he realized some of his expectations as a parent might not be met. As he acknowledged he’s someone who thinks of the worst-case scenario first, he worried Taylor wouldn’t be able to participate in athletics.

With both Dan and Lacy having participated in collegiate sports and coached at the high school level, sports are an integral part of their family. However, through their faith Dan reached an understanding about Taylor’s future, saying “God has given Taylor a soul, and that’s what makes him valuable.” Ultimately, whatever Taylor decides to be or do with his life, his parents will be there encouraging him. They want to support who he is, and not push him to fit a mold or preconceived notions. They want to focus on Taylor’s character, values, what kind of person he is, and his relationship with his Creator.

At this time, Dan and Lacy haven’t shared Taylor’s diagnosis with friends or family. Having had a personal medical condition shared without her consent as a teen, Lacy felt it’s his story to share someday. Although she’d like to be able to discuss what they’ve been through with close friends or family, at this time no one in their circle knows about the diagnosis. They aren’t ashamed of the diagnosis or trying to hide it, but would like to give Taylor the option to maintain his privacy.

When asked what would’ve been a better scenario for finding out about Taylor’s diagnosis, Lacy had some suggestions to offer. Prior to delivering the news, the doctor should have prepared information to share, and done it in person. If they’d had information from the beginning, it would’ve prevented grief and worry. She wished they’d known not to Google the diagnosis. Dan added the doctor could’ve also phrased the delivery differently.

Lacy felt thankful they stumbled upon the XXY community, and have been able to make other XXY friends. Through the Living With XXY community, she connected with another Klinefelter Syndrome mom nearby for a playdate.

Even though they’re private about the diagnosis, Lacy wanted to share their story, and give back to the community. She felt what Living With XXY is doing is “really cool,” and changing the stigma surrounding Klinefelter syndrome. Finding Ryan and the community was the “first ray of hope when they had all those initial fears.” Now, Lacy wants to support other parents. Taylor is a “complete joy,” and she hoped sharing their story would reassure others on the same journey.