Kids aren’t likely to bully Connor Blundin. At 16 years old, he’s well over 6 feet tall and built like a lumberjack. His size is the result of being born with an extra X chromosome. How did an extra female chromosome create a superhero-sized teenager?

It is one of the questions being addressed by the eXtraordinarY Kids Program at Nemours/Alfred I. duPont Hospital for Children. Opened in September, it is one of only three comprehensive clinics for X and Y variations in the United States.

Humans typically have 46 chromosomes. Male patterns are XY, and females are XX. In genetics lingo, they are designated 46,XY and 46,XX. People with genetic variations are either missing a chromosome or have a 47th chromosome with an extra X or Y. There are four kinds of X and Y disorders: two for males and two for females, yet 75 percent of them go undiagnosed.

Testing for X and Y variations is done via a blood draw and chromosome analysis called karyotyping. (It can also be done prenatally as part of DNA testing.) In the absence of those tests, diagnosing X and Y variations can be troublesome because many symptoms—learning disabilities, ADD, lack of social skills—mimic those of other disorders.

Added to that is an unfortunate stigma about X and Y chromosome variations. It’s true that X and Y are sex chromosomes, but people with X and Y disorders are not necessarily homosexual or transgendered, nor are they hermaphrodites. The disorders do, however, affect the output of male and female hormones. “Estrogen is deficient, or entirely absent, from girls with these disorders, and the same is true of testosterone with the boys,” says Ross, an endocrinologist. “That can lead to physical and developmental delays.”

For example, girls with Turner syndrome (45,X) are born without ovaries. “They get menstrual cycles because their uteruses are normal, but their ovaries are streaks of fibrous material,” Ross says. “With estrogen replacement therapy, they can undergo normal development. With a donor egg, they can carry a fetus.”

Girls with Turner syndrome also tend to be short (4-foot-9 or shorter). Through growth hormone therapy, those girls can get taller. Every inch is precious, says Megan Gentleman, a 17-year-old who lives with her family in Collegeville, Pa. It was Megan’s lack of height that made her parents suspect something was different about her. “She was the size of a first-grader when she was in third grade,” says her mother, Mary Gentleman. “By age 8, she stopped growing entirely, and we started looking for answers.”

After testing showed that Megan has Turner syndrome, she became one of Ross’ patients. Her mother vividly remembers their first appointment. “I sat with Dr. Ross and said, ‘Is my daughter going to die?’ Dr. Ross looked me right in the eye and said, ‘She is not going to die. She just needs extra help, and we will give it to her.’” 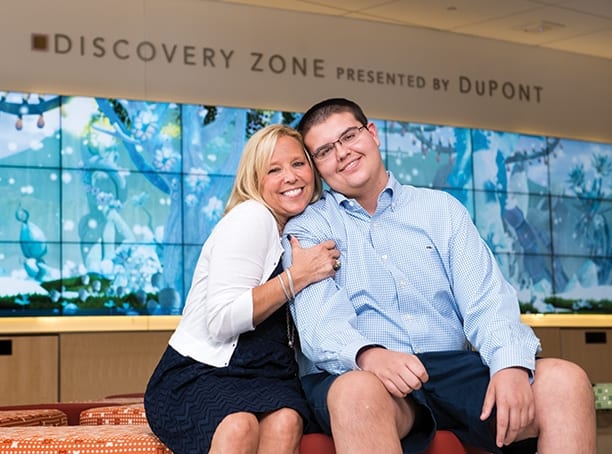 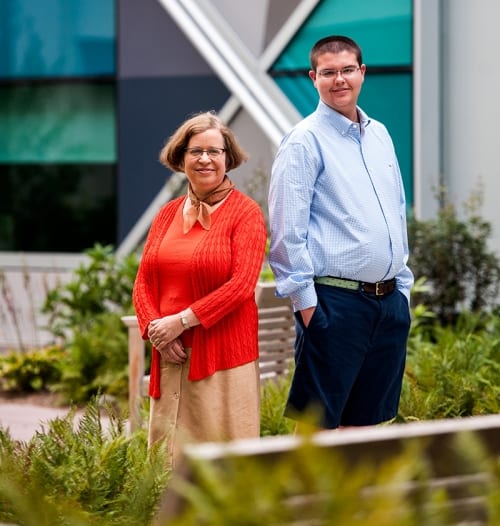 Dr. Judith Ross, director of the XtraordinarY Kids Program at Alfred I. duPont Hospital for Children with Connor.

Girls with Turner syndrome can develop cardiac, vision, hearing and kidney problems, we well as learning disabilities. Megan has escaped all of those complications. She is a straight-A student in the top 10 percent of her senior class at Perkiomen Valley High School and plans on attending college next year.

Connor had more difficulty coping with his chromosome variation. His early childhood was marred by side effects from medication that a psychiatrist prescribed for mood swings. Instead of controlling them, the medication put Connor on an emotional roller coaster that left his mother and stepfather, Sandy and Kevin Schindler, reeling. Andrew Blundin is 7 years older than his brother and no pipsqueak, but even he had trouble controlling Connor’s physically aggressive rages.

That behavior is a thing of the past for Connor. He is now part of the Emmaus program for kids with learning differences at Saint Mark’s High School. Connor is doing well academically. “Not great, not terrible, but somewhere in the middle,” is how he puts it. “I get academic support at school, but so do a lot of other kids. It seems like everybody’s got something these days.”

He’s not wrong. What Connor jokingly calls his “genetic mutation” is, on the surface, not very different from Asperger’s and other learning disabilities. Connor has chosen to speak openly about his syndrome so that he can help kids like him. He started by telling a handful of his close friends—even girls—that he has a chromosome variation.

Sandy and Kevin Schindler have become advocates for other kids like Connor, an effort that culminated in the eXtraordinarY Kids Program, which they organized and fund. They chose Nemours to house the program because Ross is Connor’s endocrinologist.

Joining Ross on the eXtraordinarY Kids comprehensive care team are other endocrinologists, developmental pediatricians, geneticists, psychologists, physical and occupational therapists, speech pathologists and social workers. Another component of the clinic is a parental support group. “There is such a lack of information about these disorders, even on the Internet,” Sandy Schindler says. “We want to help other parents and their kids deal productively with their diagnoses and treatments.”

Megan Gentleman’s mom echoes the need for information and parental support, and she is no stranger to medicine. Mary Gentleman is a registered nurse and coordinator of childbirth education at Main Line Health. What binds these women is what they experienced when their kids were diagnosed. Panic, fear, sadness, guilt are words they use to describe their emotions during those first days, months and years.

To help, Ross offers something called “anticipatory guidance” to inform parents of what their kids will experience and how to help them through it. Knowledge is power, but it can also induce guilt.

“Parents almost always ask if they did something to cause the disorder,” Ross says. “There is no environmental cause, and this is not an inherited condition. We call it ‘an event in nature’ because we don’t know the reason it happens.”

What Ross does know is that a comprehensive program like eXtraordinarY Kids is needed and that it works. Connor is her proof. “He’s doing so well,” she says with a mix of professional pride and grandmotherly affection. “I’m so proud of the young man he has become. My hope is to help other people with these disorders. We need more Connors in the world.”