Blood work indicated “something was wrong” 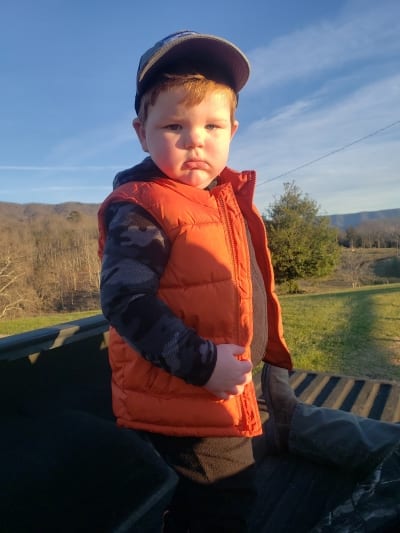 Andrea was 35 when she became pregnant with her youngest child, Connor. Due to her age, she was considered high risk, so her doctor suggested bloodwork at 12 weeks to make sure everything was all right with the baby. As she’d never been considered high risk with either of her previous pregnancies, this was her first experience with having bloodwork done while pregnant. At 13 weeks pregnant, she received a phone call from her OB/GYN telling her she was expecting a healthy baby boy who “had a sex chromosome disorder and had XXY.”

Completely taken off guard by the surprise news, Andrea “was actually floored and was actually on the floor crying when they told [her] he had XXY.” Her doctor said the blood work indicated there was “something wrong” with her baby boy, but they wouldn’t know how significantly he was impacted until after his birth. The doctor explained the baby’s chromosome disorder was “sexual, and he might be sterile when he gets older as a teenager and not be able to have kids. If it’s more severe, he might have cognitive type delays and disorders.” The doctor gave Andrea the option to abort the pregnancy and told her if she went on to have more children, they’d also have chromosomal disorders. The doctor didn’t provide much more information, and Andrea was left in shock, trying to make sense of what she’d just heard. 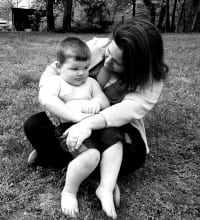 Andrea’s husband Andy was at work when the news came in, and Andrea was with her mother. She continued to lie on the floor sobbing hysterically while her mother tried to make sense of what was happening. She quickly called Andy at work and told him, “there’s obviously something wrong; the doctor is on the phone with Andrea, and you need to come home.” After hanging up with Andy, she attempted to get more information, asking if the baby was alive, would he make it to birth, and would he have a healthy life? Andrea attempted to explain everything the doctor had told her, then called Andy to give him the news. Neither had ever heard of Klinefelter Syndrome, and both wondered what that would mean for their son. Would he look different? What would his facial and body appearance be like?

Andrea immediately Googled Klinefelter Syndrome, and in the twenty minutes it took for Andy to get home, she took in as much information as she could. She never stopped reading, even since having Connor, and through her research, she found Living With XXY. 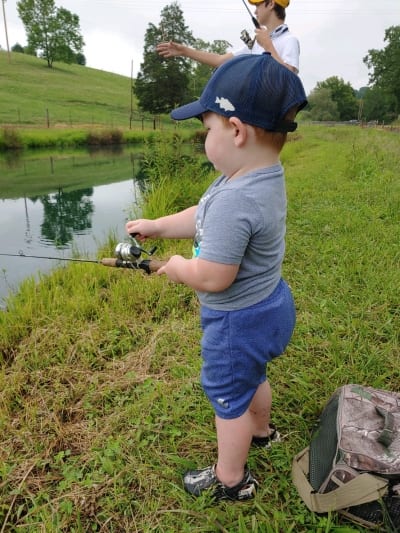 Andy arrived home, and Andrea filled him in on what she’d learned. He took the news calmly and encouraged Andrea to keep her stress level down, so she didn’t hurt herself or the baby. He reminded Andrea that the baby was healthy and would live after he was born. Andy told her, “Everything that you’ve done with Tyler ( their oldest son with autism), you are prepared to do with Connor.”

As she’d already raised one child with autism, Andrea felt confident and prepared to monitor any cognitive symptoms Connor may experience after birth. Due to early intervention services at age four, her son Tyler shows very few Autism symptoms. Andrea told Tyler about his brother’s diagnosis, and Tyler was very concerned for the baby’s wellbeing. Andrea confided in close family members and friends, bringing a close childhood friend with her to the amnio appointment. Her parents and two best friends were by her side throughout the pregnancy and continue to be big supporters of Connor and advocates for KS and autism. 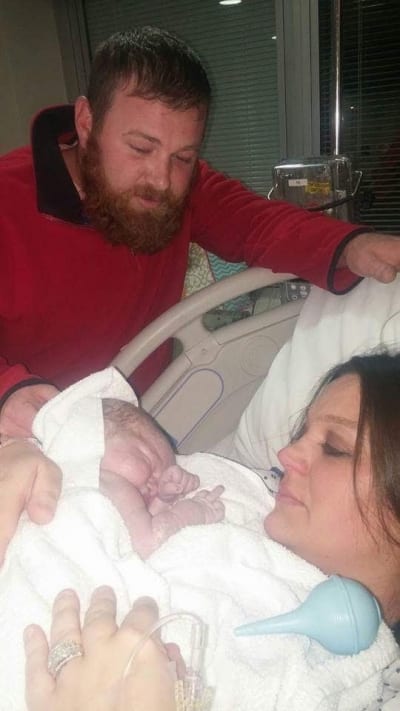 Connor was born on November 17th, 2017, at 40 weeks and 1 day following a difficult and traumatic birth. Both Andrea and Connor came close to coding several times as Connor struggled to exit the birth canal. As Connor was expected to be quite large, Andrea was given an epidural right before his delivery and was accidentally overdosed. The epidural paralyzed her from the neck down, rendering her unable to breathe during labor due to swelling. She was given oxygen and medication to counteract the effects of the epidural, and she was able to give birth to Connor vaginally. The NICU team closely monitored him after his birth, and Andrea was monitored until both their vitals were more stabilized.

When Andrea saw Connor, she was elated to see he had red hair like Andy. Her next thought was, “he’s normal! He looks normal! His arms aren’t long, and his face isn’t longer; his face isn’t distorted! He is beautiful! We’re so blessed!” Andy shared her relief, and they focused on getting to know their healthy baby boy. Connor had his father’s red hair and weighed in at 9 lbs, 7 oz.

When Connor was six weeks old, he was referred to a genetics doctor to check the pattern of his chromosomes, and she confirmed the diagnosis. Andrea connected with the doctor, whom she described as “just wonderful.” She continues to work with Connor at visits every December. She told the family what to look out for as Connor grew and answered concerns about his physical development. With the assistance of a pediatric endocrinologist, Connor received testosterone treatment at age three to help encourage his physical growth. Andrea administered the shots over six weeks, giving him a dose of .05 ml per injection. They noticed an improvement in Connor’s growth following the testosterone shots.

In May of 2020, when he was almost three years old, Connor was diagnosed with autism. Andrea had been told “many boys with Klinefelter Syndrome would also be diagnosed with autism,” but there doesn’t appear to be a connection between Autism and KS. Andrea noticed Connor was struggling with speech disfluency and was stuttering, which her oldest child had experienced. Additionally, Connor had meltdowns, which were triggered by patterns and changes with clothing or shoes. Connor was also diagnosed with a sensory processing disorder, OCD, and ADHD. 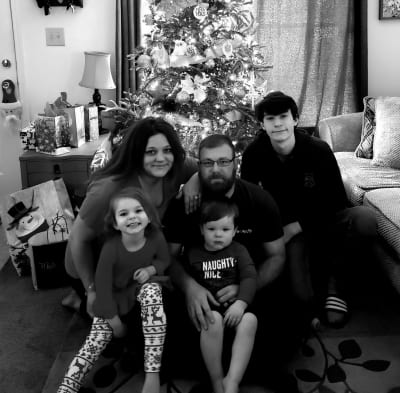 Before his diagnosis, Andrea noticed Connor exhibiting some delays and got him tested. Connor reached all milestones at an age-appropriate time, but they noticed his speech disfluency was on par with that of an 18-month-old child, and so got him into speech therapy for Klinefelter Syndrome and autism. Connor participated in four months of speech therapy in the summer of 2020. Due to the COVID-19 pandemic, his speech therapy was done remotely.

While Connor has been home primarily with Andrea since his birth, he will be attending a specialized program for autistic children. All the children attending the program will have some form of learning disability.

While at home, Connor is very social, but he’s more reserved in public and doesn’t speak to strangers. He tends to stay close to his parents and doesn’t speak to people he doesn’t know or recognize. Andrea thinks this may be a mixture of symptoms of Autism and Klinefelter Syndrome. He’s tall for his age, weighs about 70 pounds, and has Andrea’s round face.

Connor is what Andrea describes as “full-blown athletic,” and he loves to watch high school and college wrestling. Connor wants to follow in his family’s footsteps, many of whom are wrestlers or wrestling coaches. Andrea plans to start Connor in wrestling clinics when he’s four to get him involved and “make sure he knows he is no different from anyone else.” He also loves football.

When she reflects on her experience learning about Connor’s diagnosis, Andrea wishes there was more information doctors could give parents so they wouldn’t 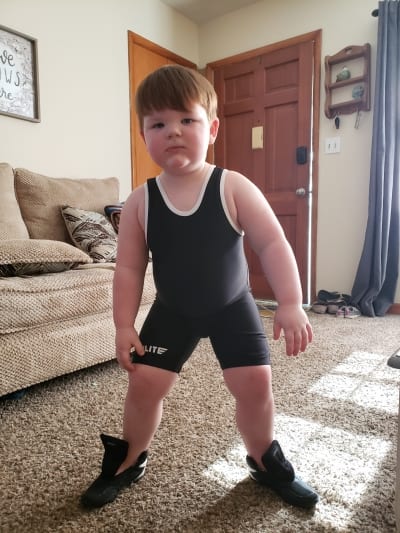 be as worried or wouldn’t have to do all the work of finding information for themselves. She also encourages mothers receiving the diagnosis to research so they’ll “know that it’s ok, that there are plenty of programs and therapy out there where they can get help on their development.” As early awareness is key for children with KS and autism, parents need to advocate for their children. She encourages parents to read as much as possible, educate themselves about Klinefelter Syndrome and any other diagnosis their son may have.

Additionally, Andrea encourages parents to find the right doctors and “make them work for you and your children.” She reminds parents to not “…freak out so much about it, just educate yourself and have faith that everything is going to be ok.” Andrea reminded them not to get overwhelmed by a parent who has sons receiving the diagnosis and learning about Klinefelter Syndrome for the first time. She says to “Start educating, start researching, start talking to people. Use your social media platforms to talk to other parents. Use forums. Really read, read, read before you take a negative approach or get depressed about it. Take it as a blessing that your child is healthy because there are always worse circumstances they could be dealt with.”

Finally, Andrea is thankful she didn’t abort her pregnancy when she learned about the diagnosis, and she feels that would’ve been such a big loss to their family because Connor is a healthy, happy child. She says, “He is such a joy to her family and his siblings, and he deserves to live and get a chance,” as her other two children have had.